I’m sure you aware of the fact that Brothers is an official remake of 2011 Hollywood film Warrior so don’t want to make this long by writing about the story and all. For me Watching Akshay Kumar doing Mukkebaaji – aema j paisa vasool chhe but for you that’s not enough, right? It’s a kinda sports film which surely will entertain those who’s more in to fitness, action & of course sports.

What I like the most about this film is Action & hard work of Akshay Kumar & Sidharth Malhotra – banne party ae super Impressive Body to banaavi j chhe & but Martial arts really need a lot of rehearsal & they did it.

This film is predictable, lengthy & slow at times but if you are someone who loves family drama or emotional film, you will surely like this. Yeah it’s a sensitive film with solid back ground score (haaa somehow I really liked the music). Songs do have that magical feel especially Gaaye Jaa (Gham mein hai sargam) is beautifully written by Amitabh Bhattacharya.

Do give a chance to Akshay’s and Sidharth’s magnificent efforts at MMA. It’s a worth watch. 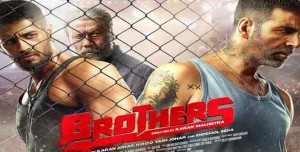 Brothers – a worth film

A salute to our Freedom Fighters. Jai Hind