Gujarat government today announced a new policy to give incentives to Gujarati film industry. As per the new policy announced by state government spokesperson and minister Shri Nitin Patel, films will be divided into A,B,C and D four categories and incentives will be given as per the category of film. 81-100 points will secure ‘A’ category, 61-80 will secure ‘B’ grade, 51-60 ‘C’, 41-50 ‘D’ while films that are given below 41 points will not find place in any category.

Films promoting social evils, sati tradition, superstition, misleading people over controversial issues, promoting something which is against national unity or found objectionable due to other related issues will not be qualified for assistance.

Meeting of government committee will be held every 3 months to implement this scheme. Assistant amount will be deposited directly to producer’s bank account. Artists and technicians will be given prizes 32 categories. The amount of such prizes has been doubled. 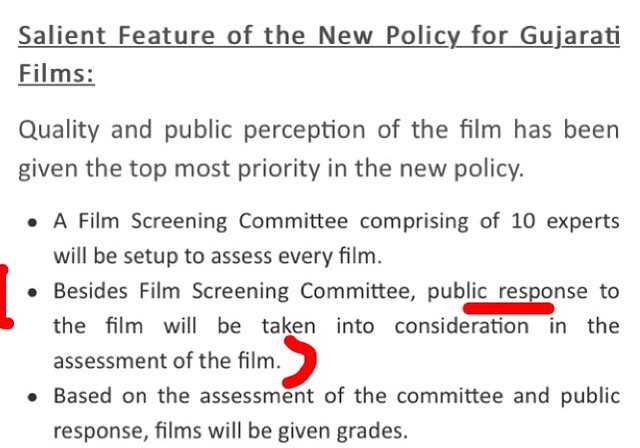 With a view to give thrust to regional cinema, Gujarat Government today announced a new improved policy to promote and encourage production of quality films in Gujarati Cinema.

Ever since the dawn of multiplex culture, there has been growing demand for urban Gujarati films and the new policy of Gujarat government is expected to address these demands by offering financial assistance and support to the aspiring filmmakers. 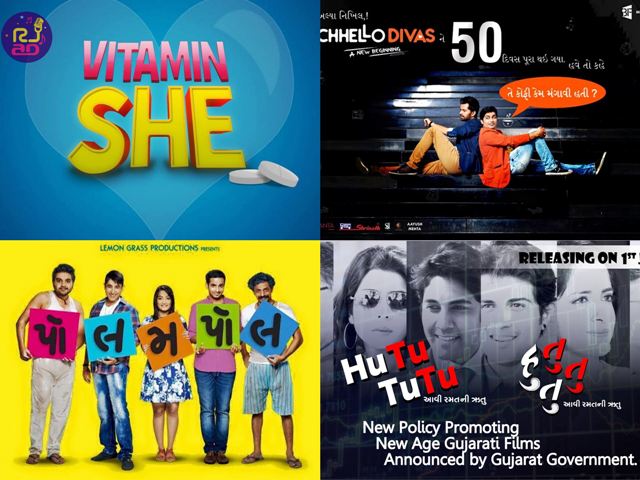 Salient Feature of the New Policy for Gujarati Films:

Quality and public perception of the film has been given the top most priority in the new policy.

– A Film Screening Committee comprising of 10 experts will be setup to assess every film.

– Besides Film Screening Committee, public response to the film will be taken into consideration in the assessment of the film.

– Based on the assessment of the committee and public response, films will be given grades.

– On the basis of the grades, the filmmaker will receive financial assistance ranging from Rs 50 lakh to Rs 5 lakh.

– Children’s Film and films revolving around the subject of ‘Women Empowerment’ will receive additional 25 per cent financial assistance.

– Gujarati films that receive Government of India’s ‘Rajat Kamal’ award will be given Rs 1 crore reward.

– Similarly, any Gujarati film that wins award at International stage will be given reward ranging from Rs 5 crore to Rs 2 crore.

– Financial assistance and support will be extended to a film only if it is shot on 35mm or has 2K Resolution/Higher Format.

– Alongside maintaining the resolution and quality of the picture, film should have Sound Recording Digital Surround Sound 5.1 (Dolby Digital/ Dolby SR/ DTS/ DTSE) or upgraded technology.

– As primary requisite to avail benefits of the new policy, film should be having minimum 100 minutes running time. 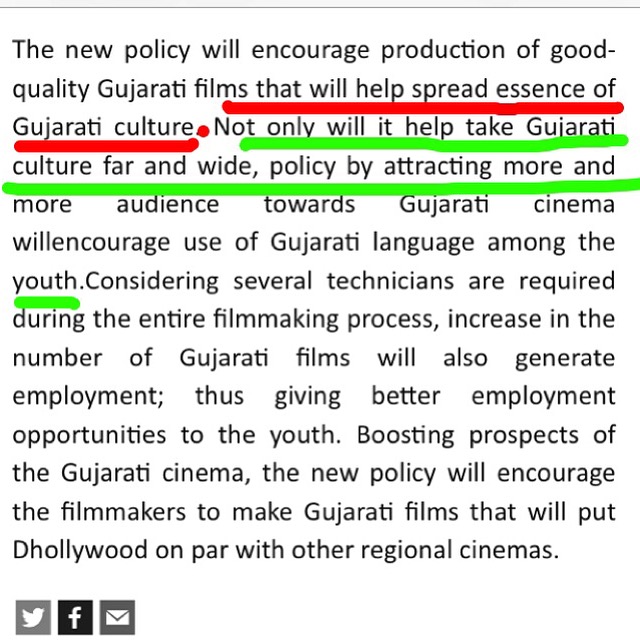 screenshot of my personal fav part of the policy